It is not uncommon to see white patches or spots on shell cameos.  When on the back of a shell specimen, they are generally natural to the material and nothing to provoke concern.  White areas on the front are sometimes an original feature, but they can also be the result of a corrosive process known to conservators as Byne's "disease" or Bynesian decay.  Whitish powdery, grimy, crusty or spidery looking marks that appear some time after you acquire a piece are very likely to be Byne's, if the item has been kept in the conditions described below.

These marks are most commonly seen on the background bordering the carving, but may appear anywhere.  Byne's is seen less frequently, and is more difficult to spot, on the white layer of shell pieces.  Helmet shell seems to be more vulnerable than conch or coral.

Rather than attempt a chemistry lesson here, the reader is directed to this thorough but readable article posted by the United States Park Service, which was written with the shell collector in mind, but is equally useful to the cameo lover:   US Parks Byne's Disease (Unfortunately, this excellent web page goes down sometimes for lack of government funding.  The Wikipedia article is also useful.)

The ingredients needed for this process are:

This previously unaffected piece spent approximately a year and a half, during a time of unusually wet weather, stored inside an older cardboard box kept in a space with limited air circulation.

Prevention requires eliminating one or more of the environmental conditions when storing shell or coral cameos.  Used for long-term storage, all wood containers, those made of wood-based material and even some plastics pose a risk if closed and kept in a humid setting.  If tissue paper is used, the acid-free type is recommended.  There is no evidence the buffered type is any more effective at protecting your treasures.  However, plain white copy paper used to line drawers and boxes can both form a barrier between your cameos and the acidic gasses the container may be giving off as well as absorb some of any acid that forms.  The paper needs to be changed regularly, as once it is saturated it is no longer effective.

Shell cameos kept in an overly dry environment for too long may become brittle; excessive humidity promotes the development of Byne's.  The optimal humidity level for happy cameos is approximately 55%.  Home hygrometers are inexpensive, but as a practical matter this factor may be more difficult to manage than others.  Good ventilation reduces the opportunity for gasses and mositure to concentrate and form cameo-marring acid. 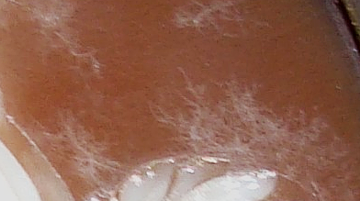 Once Byne's has begun on a piece, removing any powder or "efflorescence" from the surface will help prevent its spread.  These salts (not sodium choloride—do not taste!) are water soluble, so this can be accomplished by one or more washings in distilled water.  (If the cameo is not in a setting, it may be soaked.  Total immersion of set pieces carries some risk related to water trapped between the cameo and setting.  However, leaving the Byne's untreated may carry the greater risk of future problems.)  It is important that the piece be thoroughly dry if it is then to be put into storage.  This is the cameo shown above after washing in de-ionised water and gentle brushing.

We at Cameo Times have found an old fashioned pencil-style typewriter eraser can sometimes reduce a stubborn incrustation when it is on the cameo's figure.  The eraser tip, which can be shaved down if a finer point is required to reach an affected spot, allows a controlled application of friction with a mild abrasive.  Under magnification, this habillé cameo appeared to have a Heidelberg dueling scar on her cheek.  Gentle use of the typewriter eraser removed the worst of the efflorescence, leaving her "eye clean", with a faint blush. 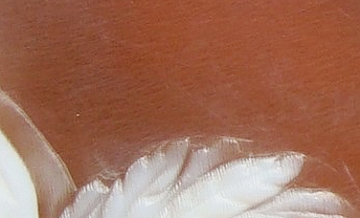 Although it is not possible to reverse the process and restore the original color and shine to affected spots, a light oiling can mitigate their appearance considerably.  These places may also darken over time without any treatment such as oiling, becoming less noticeable but remaining as dull cloudy surface scarring of the background shell.  The scars often have a "spidery" appearance when viewed under magnification.  It should be noted that oiling cameos offers no protection against Byne's—oiled specimens are just as vulnerable as un-oiled specimens in adverse conditions.  Here is our example after an application of mineral oil was allowed to soak in over night, then the excess removed by throrough rinsing using purified water.

Red coral quite often has streaks or patches of white with irregular edges mixed in with the red, and these are natural to the material.  If patches have filamentous, thready borders, Byne's must be suspected.  The vertical streak on this specimen appears to be an integral part of the coral.

The patches around the figure's throat have the characteristic spider web look of Byne's.  If the cleaning methods outlined above were not to affect them, Byne's could be ruled out. 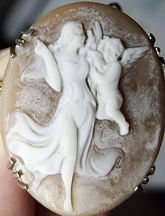 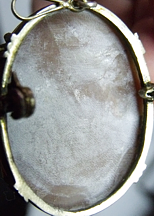 Not all "white stuff' is due to the Byne's process.  This cameo looks as though it has a bad case of Byne's, front and back.  That it is not Byne's was demonstrated by the failure of multiple purified water baths (helped along by a soft toothbruxh after each soak) to make any change at all to the cameo's appearance.  Even a fairly energetic test rubbing on the back with the typewriter eraser did not remove any of the white "film".  Since there is no sign of abrasion to the carved figures, a past cleaning with a harsh agent is unlikely to have caused this.  Quite possibly Camexco, the maker, created this effect deliberately. 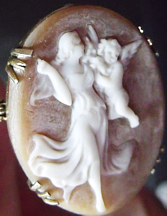 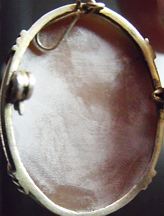 Unless allowed to progress for a very long time, Byne's is a cosmetic issue, not one affecting the overall integrity of the piece.  If the affected area is extensive, it is appropriate to mention it in the description of the cameo's condition.  When it is minimal, it can reasonably be seen as "commensurate with age".  However, care should be taken not to confuse a Byne's manifestation with the carver's work; Byne's can make a figure appear to have a glow around it, or stars above it, when the artisan had no such intention.