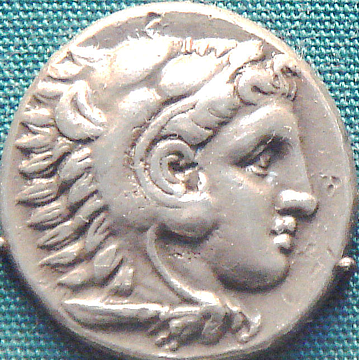 One of the most famous figures of Western history, Alexander the Great, son of Philip II of Macedon, lived, and died–under uncertain circumstances when not quite 33 years of age–in the 4th century BCE.  His father, through a combination of military skill and diplomatic craft, including a number of strategic marriages, saved the Macedonian kingdom from being overrun by its more powerful neighbors while still himself a young man.  Alexander, who was tutored as a youth by Aristotle, ascended to the throne at the age of 20, after his father was assassinated.

With Macedonia secure, Alexander set out to enlarge his territory, not to mention his personal fame and glory.  He successfully took on the Persians, the mightiest regional power for several centuries.  Their empire essentially became his.  Everywhere he went he erected monuments to his success and founded cities bearing his name.  And, of course, he issued coins, which provided images of the famous man for cameo cutters to follow.

Alexander was of the Argead Dynasty, which traced its ancestry back to the mythic hero Heracles (known later as Hercules to the Romans).  It was quite the done thing for ancient rulers to have themselves depicted on their coins in the guise of a god.  Alexander's father Philip appears on coins as the gods Apollo and Zeus.  It was almost modest of Alexander to have himself shown in the signature lion's pelt of Heracles/Hercules, just a reminder to the people of his heroic origins and destiny.

This is the way we see him most often on cameos, his popularity as a subject attested to by his appearance across cameo materials. 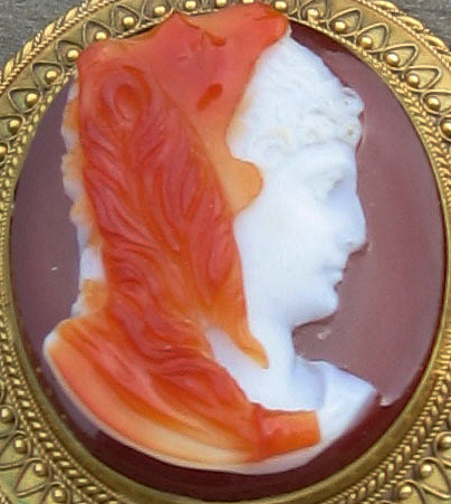 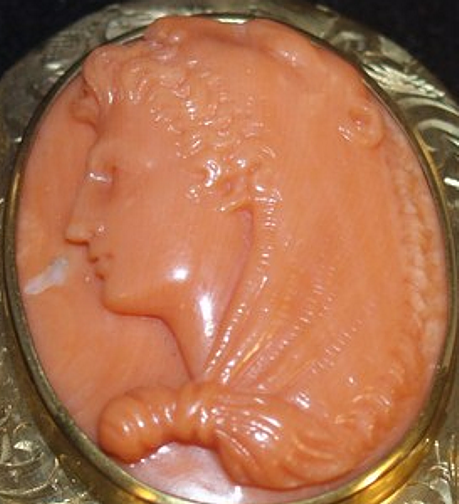 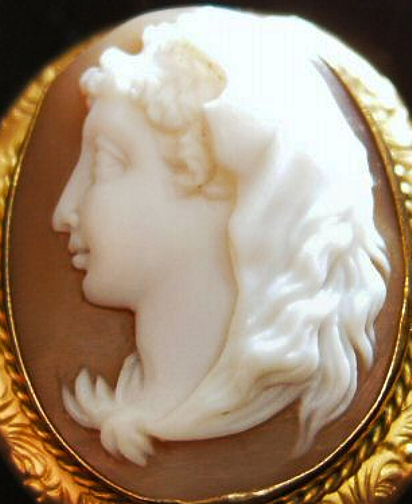 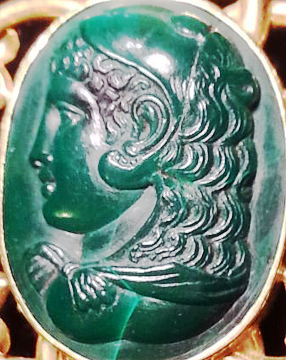 He is recognizable even when seen facing front, when executed floridly or crudely.

The straggling lion's mane can easily be seen as the long tresses of a woman, and there are indeed a couple of female mythological figures who were said to have donned the pelt belonging to Hercules.  It is not always possible to be 100% confident whether a cameo features one of these ladies or Alexander.  If the figure wears a necklace or other jewellery, or has a distinctly female shape, obviously it is not Alexander.  Alexander's jaw is rounded, yet still strong and determined.  The hair framing his face is curly, but not in the short tight manner of Hercules; he may have dressed it with oil to form ringlets around his face. 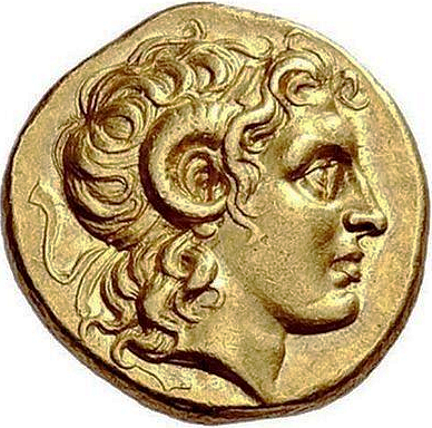 A murkier region is that of Alexander vs. the Young Hercules.  The figure on the coin shown at the start of this article is routinely described as a young Hercules with the features of Alexander.  It is the contention of this article that it is properly identified as Alexander in the guise of Herakles (since Alexander would have known his legendary ancestor by his Greek name).   His father's coins are not described as Apollo or Zeus with the features of Phillip II of Macedon, they are described as Phillip as the god.  The coin shown at left, with Alexander wearing the ram's horns of the Egyptian Ammon-Ra (Amun-Re) is described as just that, not as Ammon with the features of Alexander.  Alexander was brilliant at self-promotion; coinage was a part of the propaganda machine.  The goal was to persuade the people he conquered and ruled of his own divinity.  He would have wanted them to think "Alexander" first, "Herakles" or "Ammon" second. 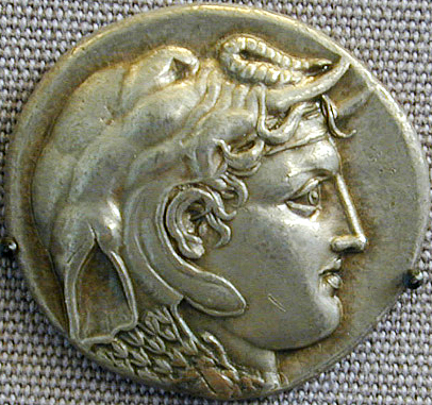 In a much less common presentation of Alexander he wears not a shaggy pelt but, in a similar manner, the hide of an elephant.  This image is inspired by another coin, the tetradrachm issued by Ptolemy I shown to the right.  Ptolemy was one of Alexander's favored generals; Alexander entrusted him with the governorship of a prize section of his empire, the region spreading out from what is still Alexandria, in Egypt.  After the conqueror's death, Ptolemy became king of this region, founding the Ptolemaic dynasty that placed a line of Greek rulers over Egypt and that ended with the famous Cleopatra VI.  He evidently learned a trick or two from Alexander: his coinage features not his own profile but that of the deified Alexander, a reminder to the conquered populace of the source of his authority.  As a Greek of noble birth, Ptolemy also claimed descent from Herakles.

When they were not fighting other armies, great rulers would see how much big game they could bag.  (The Syrian elephant may have been driven to extinction by this activity.)  The coin is usually thought to represent Alexander's–not very successful–foray into India.  One scholar proposes that it may also have served to remind the people of Egypt of one of their greatest game-slaughtering pharaohs, reinforcing Ptolemy's legitimacy.

A point to remember about cameos based on coins that were made long after the coin was minted is that the specimen coin available as a model to the cutter most likely had suffered centuries of handling and was no longer as pristine as the example shown above.  Eroded and/or badly struck coins lead to cameos with ambiguous features.  The cameo below was mistaken for a figure wearing a helmet, an error readily made, as the ear of the elephant does resemble a neck guard and many styles of Greek helmet have visors that look like a face.  The easiest to spot clue to the correct identity is that ear.  The corkscrew curls around the face confirm it.  In order to make it more pleasing to the eye, the artisan, working in the oval cameo form rather than the round coin form, had to add to the composition something not seen on the coin: a neck.  In fact, he has made his figure look as though it was copied from a bust, possibly a female bust, further confusing the identity. 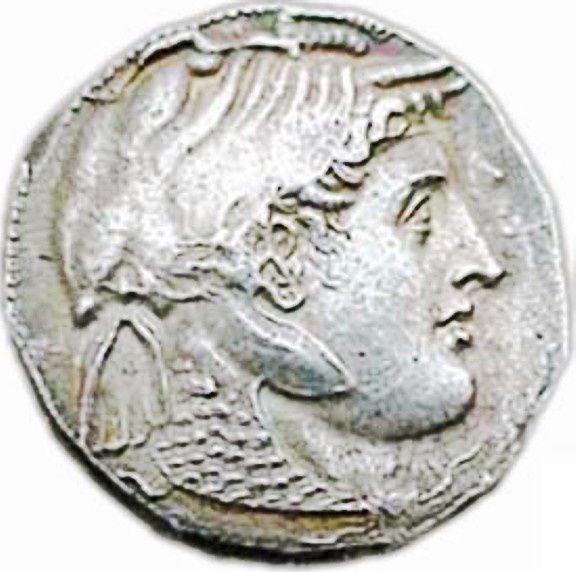 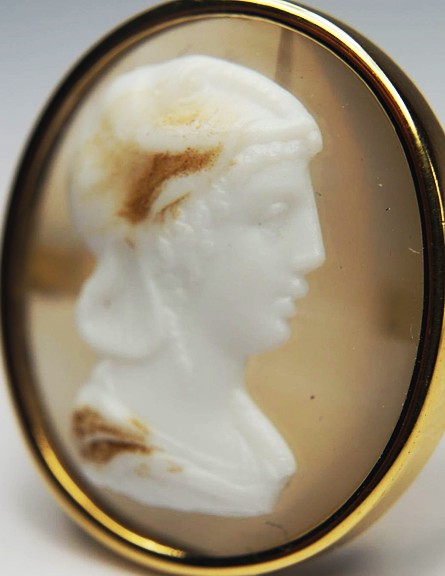 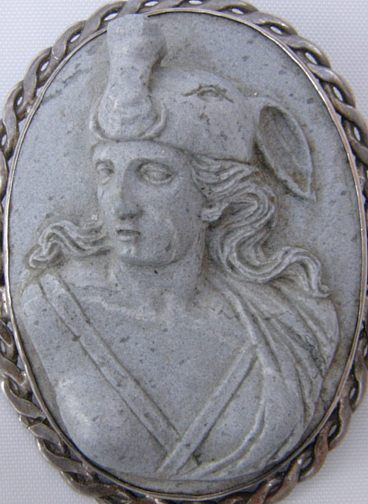 At first glance the cameo to the left might make one think Alexander; however, this figure is clearly female.   We have not yet been able to identify her as a specific individual and she may be more allegorical than historical, the personification of Africa perhaps.

Another place we come across Alexander is on cameos based on a bas-relief by the Danish sculptor Bertel Thorvaldsen, imagining the triumphal entry of Alexander into Babylon, his war chariot piloted by Nike, goddess of victory. 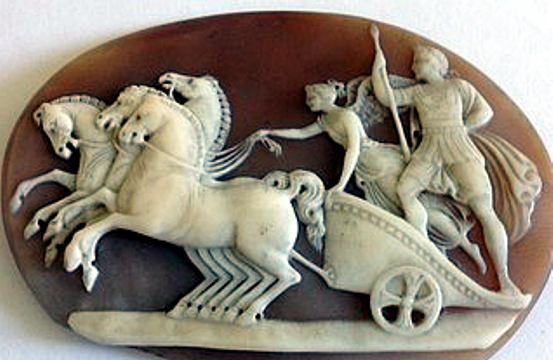 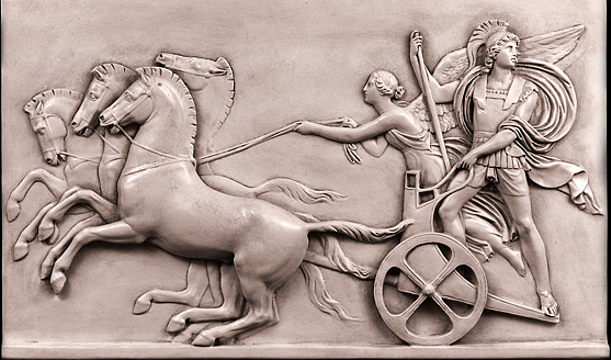 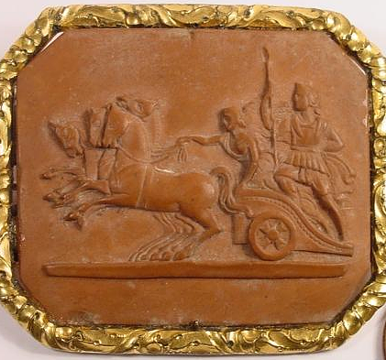 Thorvaldsen was not the first to take up the subject of this almost mythical figure's ceremonial entrance into the place where he intended to make his capital, but where instead he would die.  The French artist Charles Le Brun left out Nike, but did imagine an elephant into the scene, perhaps one of the exotic wild animals the local rulers were said to have brought out to impress and honor their new overlord.  Cameos with this version of the subject are much less common. 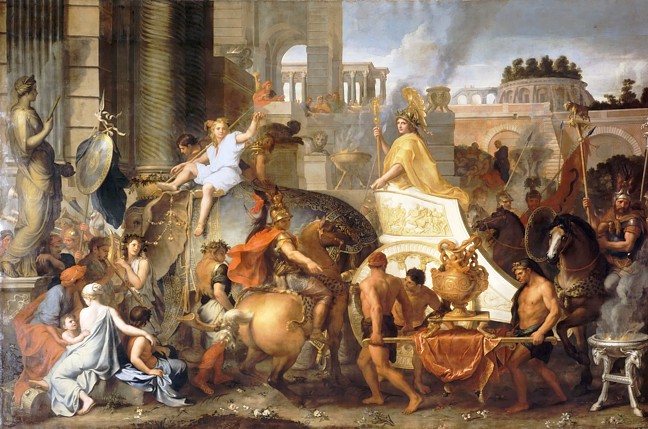 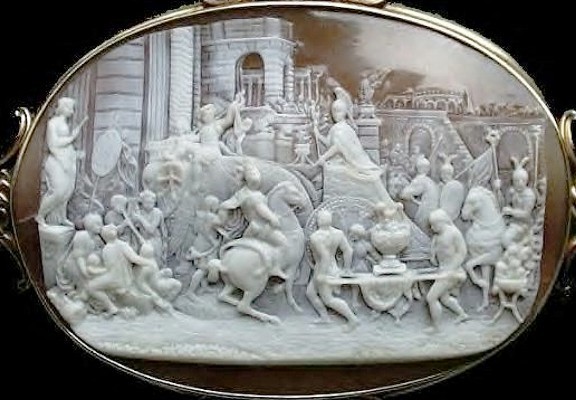 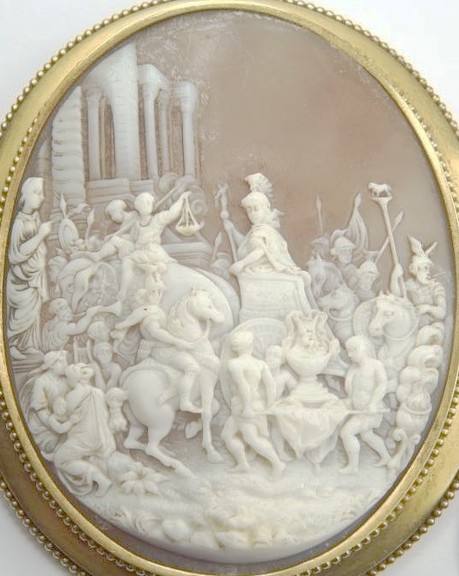