A certain athletic apparel company has made the Greek name of this goddess a household name.  She is the goddess of victory, plain and simple.  There are no tales involving her as an actor with a full range of thoughts, emotions and actions.  She was never seduced by Zeus, never smitten with some beautiful youth, never engaged in bad behavior out of jealousy.  Heroes come to her as supplicants for her favor; she hastens to the battlefield to crown the victor with laurel or to award the palm.  She appears frequently on ancient coins, sometimes as an effigy in Athena’s palm—Athena’s epithet is then Nikephoros, carrier of Nike—or holding out a laurel wreath, hovering above a racing charioteer. 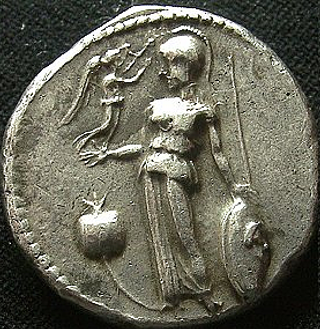 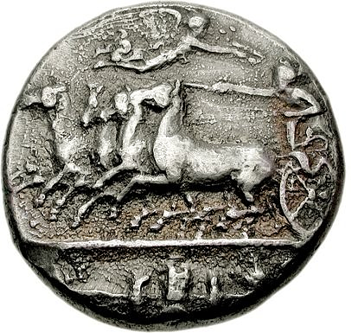 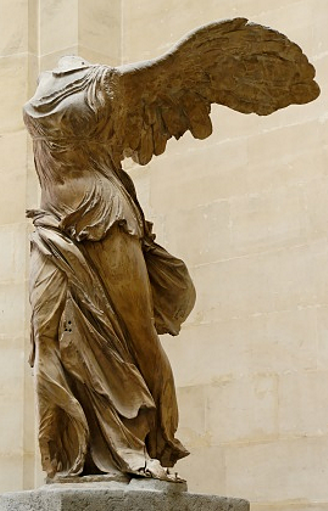 The image of her that is probably the most generally familiar to us—the Winged Victory of Samothrace, now in the Louvre—may have contributed to cameo artists’ conception of her, but does not seem to have been reproduced on cameos, or not enough to still be in common circulation. 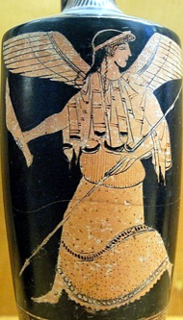 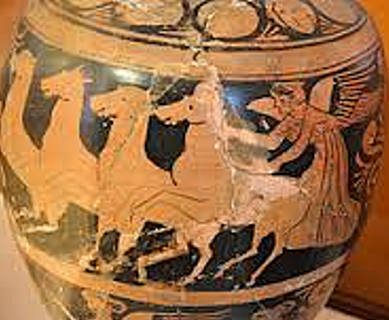 Nike has been envisioned as having wings since ancient times, even though she seems to prefer driving to flying.

The three depictions of her seen most often on cameos are: as a bust; in a chariot, racing to the scene of a battle; and inscribing the names of the victorious or their heroic deeds for posterity. There are two conventional ways of letting the viewer know it is Nike when she is less than full figure. One is to move the wings from her back to her head. Nike is closely associated with Ares/Mars as well as with Athena and is sometimes also given a spear, which is the weapon of choice for each of the Olympians. Carvers occasionally truncated the spear into an arrow, or a sword.

The carver who gave his figure an arrow seems also to have given her a little victory winged butterfly for her shoulder, inspired, no doubt, by Psyche’s familiar, or maybe just a vestigial dorsal wing of her own. The hero Perseus and the messenger of the gods, Mercury, may be depicted with wings on the head, but they are affixed to a cap or helmet, not sprouting directly from the skull.  Athena is also sometimes seen wearing a winged helmet.

The other standard way of indicating Nike in bust form is to place a laurel wreath on her head. At first glance this can make her look like one of the Muses. However, the lack of any other identifying attribute is the clue that it is the goddess of victory. 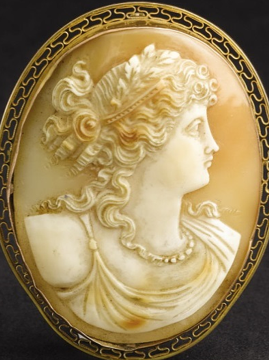 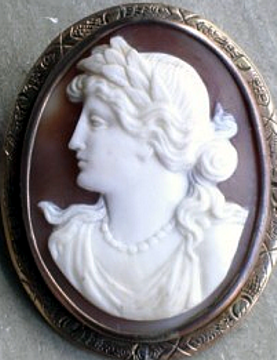 Nike hurtling through the sky alone in her biga, with its two horses, is quite a common cameo subject.  As she races to the battlefield, she holds out a laurel wreath, or extends a palm frond, to award to the victor.

It is not always certain who her passenger is.  With one arm akimbo and a spear in the other hand, he could be the god of battle lust, Mars. They would be natural battlefield companions.  However, some of these pieces are undoubtedly based on the relief by Thorvaldsen, shown in the center of the gallery, of The Triumphal Entry of Alexander into Babylon.  Thorvaldsen may quite deliberately have posed Alexander as Mars.  An amusing convention in the depiction of gods and goddesses in chariots can be seen here: male riders stand with both feet firmly planted; females, who are nearly always the driver, whether alone or not, guide their steeds while standing gracefully on one foot, in a modified arabesque position.

Cameos with Nike charging through the streets past Roman monuments were perhaps derived from the common ancient coin image (shown at top of article) of Nike above an anonymous charioteer, compressing the scene and making her the driver. 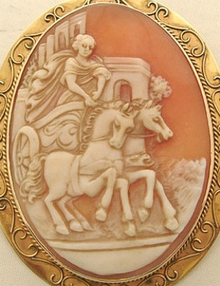 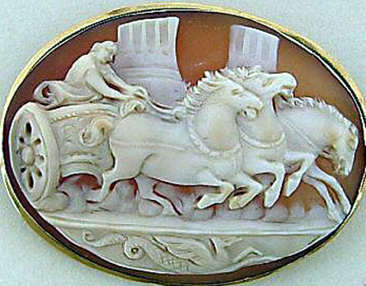 The third fairly common presentation of Nike does not show her racing to a battle in progress but after the fact, when the victor is decided. She not only confers the symbolic rewards of victory, she plays a role in preserving the memory of valor by recording the names of great heroes and their mighty deeds, usually on a shield, but sometimes on a tablet. Another element that appears in some depictions of Nike in the aftermath of battle is the spoils of war – a trophy of the captured arms and armor of the defeated foe. The second and third examples of Nike inscribing a shield show her apparently seated on a cuirass, armor for the torso. Despite the similarities, the winged female inscribing words on a tablet by lamp light is not Nike, rather an allegorical figure of Inspiration.  While the standing Nike with spoils of war is genuine mother of pearl, it is a mass produced copy of the Tassie gem shown as a wax impression (from the Beazley Archive) next to her. 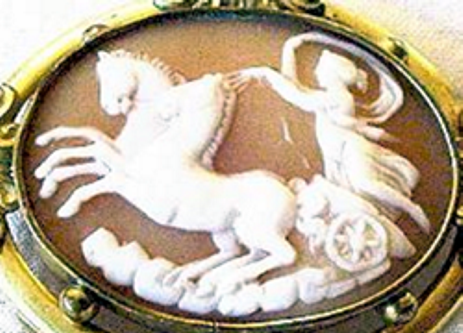 Correction:  An earlier version of this article identified this figure as Nike.  Further research and consultation among the editors have led to the conclusion she is Aurora/Eos.  There are some exceptions, but Nike is nearly always winged, while the Goddess of the Dawn frequently goes about wingless. 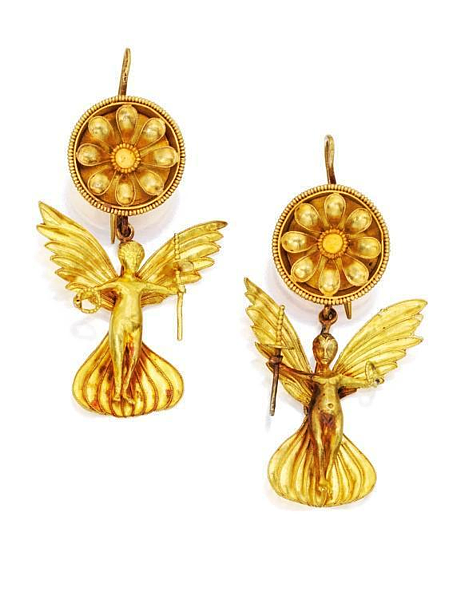 Cameo Times is not alone in making the occasional error when identifying winged figures.  This pair of gold earrings were sold by Sotheby's New York in their spring, 2015, auction of important jewelry.  Made by the famous firm of Castellani, Sotheby's, relying on Castellani and Italian Archeological Jewelry, Susan Weber-Soros and Stefanie Walker, eds., identify this wide-hipped, sword-wielding, wreath-bearing figure who also happens to have wings as Eros, seeing the sword as a torch. 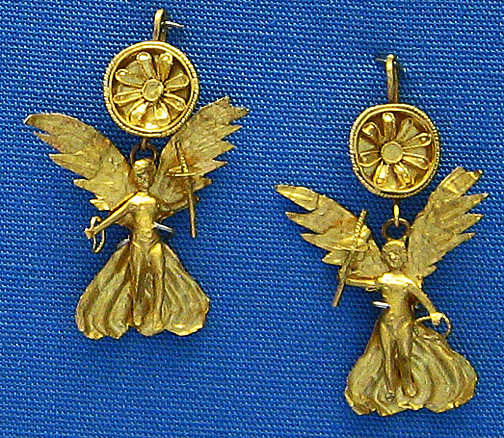 Following the book, they point out that a similar pair is in the collections of the British Musem.  This is correct; it is also the case that the Museum identifies them as Nike.