They are fairly easy to recognize in these clock-style brooches, still rolling along in their chariots around a central clock face, which is flanked by two female figures who are surely a couple of the Hours.  While the first of these is clearly the work of a different hand or workshop, the other three strongly resemble one another--with some variation in the position of the clock's hands--and it is probable they are the work of the APA workshop in Torre del Greco.

Judging by the condition of most specimens that appear for sale, these mixed material brooches, with the six other Days, executed in lava, circling a central coral Sol, must date to an earlier time than the majority of other pieces with this theme.  That, or they were much handled, as it is rare to find one without significant erosion and chipping. 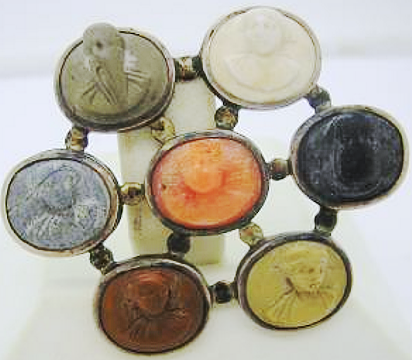 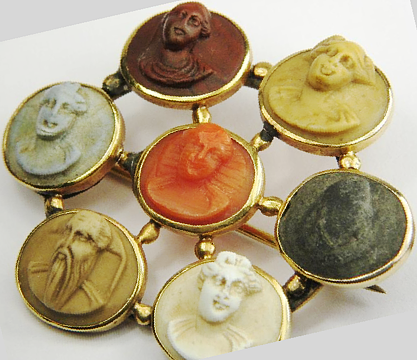 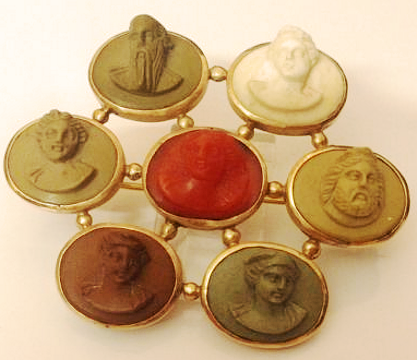 Saturn is typically the easiest to spot among the lava carvings.  Using him as the anchor, one can then work out who the others are.  As can be seen, Saturn's position in the circle is not fixed.  Also, a bit difficult to make out in these photos, Days may process clockwise, as in the second brooch, or counterclockwise, as in the other two.  (Assuming the photographs have not been reversed.) 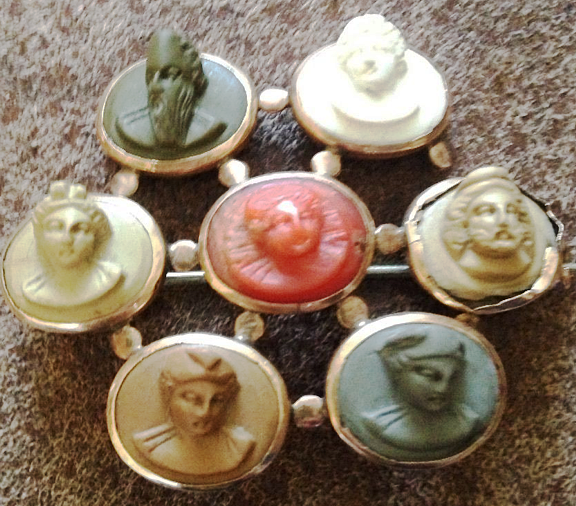 The cameos in this specimen are in better condition than those in many other similar pieces.  However, the eye is quickly drawn to the unevenness of the bezel at the 3 o'clock position, containing a cameo that is clearly Jove.  This in turn prompts one to look more closely at all the cameos.  Although the seller noted only the damage to the setting, there is another issue: the cameos are not quite in order.  Jove is where Mars should be and vice versa.  While it is possible the cameos were originally set this way, it is also possible that more than one cameo became loose with time and were not replaced in their proper order.  An inquiry into the condition of the cameo and setting at the 7 o'clock position would be reasonable.