The story of Phaeton (also Phaethon) is told at length in Ovid’s Metamorphoses.  As Ovid tells it, Phaeton is the son of the Oceanid Clymene and the sun-god, Apollo, although, when the story opens, Clymene has a mortal husband.  Phaeton boasts to a friend about his parentage, but the friend scoffs and tells him he is a fool to believe it, even though it is his mother who has told him this.  Phaeton then has doubts, so Clymene suggests he go to his father for confirmation.  His arrival at the palace of Apollo gives Ovid an opportunity to enumerate all its other occupants, including the Hours.  The god receives his son warmly.  Wishing to demonstrate paternal affection, Apollo commits that great tragic error: he offers to grant any request the young man makes without conditions or limitations.  He compounds the error by swearing on the River Styx, the inviolable oath of the gods.  Desirous of proving to his friend, and all the world, just whose son he is, Phaeton asks to drive the chariot of the sun across the sky for one day.  Apollo knows this feat is beyond the strength of his son’s arm and will, but cannot break his oath.  He unsuccessfully tries to dissuade Phaeton by describing all the difficulties and perils of the journey, including potential assault by the fiercer figures of the zodiac.  Phaeton is not to be redirected to a safer course.  The Hours harness the horses.  (Ovid names them Pyrois, Eous, Aethon and Phlegon.)  Apollo, after placing the solar crown on his head, gives Phaeton instructions on which route to take and how to govern the team of the quadriga.  Then, with Aurora going in advance, Phaeton is off.

Of course, it all gets away from him.  The blazing chariot careers this way and that; Phaeton becomes so terrified he drops the reins.  The horses, given their head, veer toward the earth, setting even mountains on fire.  Fearing for its very survival, the primordial goddess Earth complains to Jupiter and begs him to spare her lands and all their children.  Jove hears and is moved.  He strikes Phaeton down with a single bolt, and Apollo’s son falls to earth like a flaming meteor.

Phaeton is not one of the more common cameo subjects, but does come along from time to time.  His Fall was rendered in detail by master gem carvers of both the Renaissance and the neoclassical period. 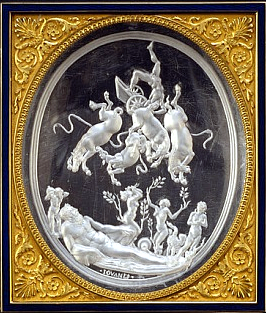 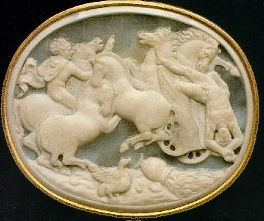 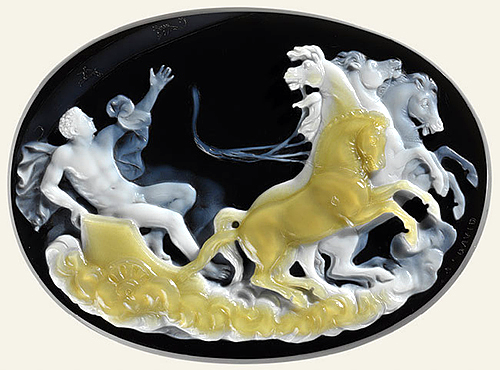 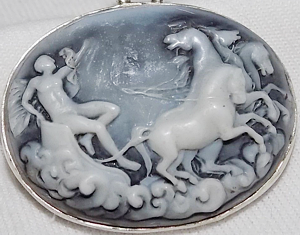 The resin cameo to the right, a copy of the David cameo above it, turns up from time to time.

However, for the most part, this is not the scene chosen most frequently by the carvers of Torre del Greco.  Even though Phaeton is riding for a fall, the preferred presentation is this more optimistic one illustrated in a bas‑relief by John Gibson, showing the over-confident youth just setting out on his disastrous ride, a sprinkling of stars around him.

We do not know if he was the first to do so, but Tommaso Saulini copied the relief faithfully, adding, or perhaps restoring, one star at the bottom. 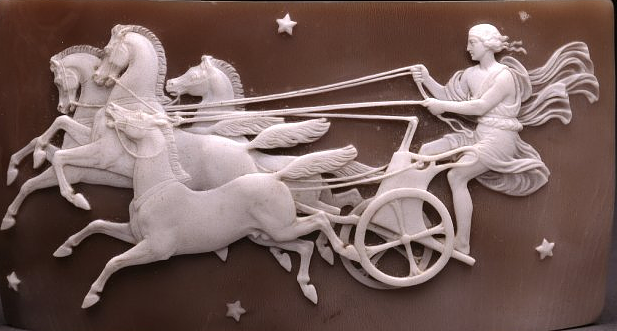 This scene is sometimes mistaken for Aurora in her chariot.  That goddess generally wears a long peplos, drives a biga and has the lone Morning Star accompanying her.  Phaeton wears a short chiton; he drives a quadriga; the several stars around him represent the high heavens and remind us of the perils of the constellations he will encounter.

Phaeton is also sometimes, understandably, confused with Apollo.  Features that help differentiate them are the rather bushy laurel wreath seen on many Apollos, the radiance sometimes indicated around the god, and any of his other attributes, such as bow, quiver or lyre.  None of these appear with Phaeton. Apollo is generally shown handling the reins with ease, sometimes with just one hand, while Phaeton is always shown with a good two-handed grip, if not actually straining to maintain control.

Wedgwood chose a different image for their Phaeton, this one by George Stubbs, in which Phaeton is shown bracing himself strongly with his legs in order to exert more force on the reins. 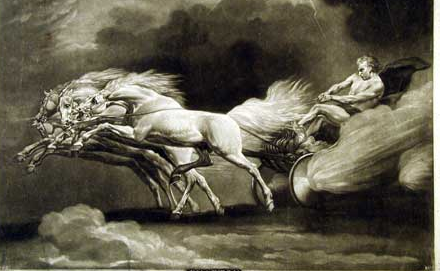 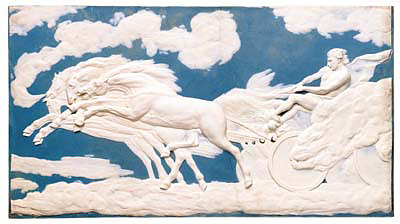 A scene that is easily confused with Phaeton is the allegorical one of The Genius of Peace Halting the Horses of Mars (La Génie de la Paix Arrêtant les Chevaux de Mars).