As god of fire and volcanoes, one might expect Hephaestus (or Vulcan, as the Romans knew him and as we shall call him here), to be the most volatile of the Olympian gods, but in fact he is the reverse: level-headed and industrious, perhaps even a little boring compared with others.  Where he really shines is in his talent for making things, which falls under his other title as the god of smiths—goldsmiths and metalsmiths—and of artisans and masons. Vulcan is the celestial master craftsman, designing and producing to order fabulous items, both beautiful and useful, for the inhabitants of Olympus as well as for other selected deities and mortals.

He is said to have his smithy under Mt Etna, the flaring of the forges’ flames neatly accounting for its occasional eruptions as well as underlining his connection with fire.

Although the son of Juno (Hera) and Jupiter (Zeus), or, in some myths, of Juno alone, Vulcan did not grow up on Mt Olympus.  He was rejected as an infant for being born with a slightly deformed leg and foot which gave him a permanent limp.  As Juno was not the kind of mother who could tolerate such imperfections, she threw him out of Olympus in disgust.

According to myth he fell to earth near the island of Lemnos.  Here he was rescued and adopted by the local Nereids (sea nymphs) who embraced his disability and happily nurtured his creative drive.  The gem engraver who signed himself "Apollonides" depicted the nymphs saving the infant from drowning in this chalcedony gem executed for Prince Poniatowski.

Vulcan only returned to Olympus when fully grown, after Juno got drift of all the exquisite jewellery he had been making and decided that he was not so repugnant after all.   Jupiter knew that he would not return willingly, and so he sent Bacchus (Dionysus), god of wine, to get him drunk first.  The plan worked and Vulcan was brought back suitably inebriated on the back of a donkey, not the last time the others would make him look foolish.

Eventually Vulcan was granted his own palace of gold and the most fantastic workshop equipped with numerous forges and bellows along with a host of magical helpers, including the gigantic, one-eyed Cyclopes.  Jupiter also gave him Venus (Aphrodite), the goddess of love and beauty, in marriage.  This might seem an unlikely match, but Jupiter reasoned any other candidate would cause too much envy and discord among the gods, especially as almost all of them, including himself, lusted after Venus and she was no shrinking violet herself.

Needless to say, Venus pursued extra-marital affairs regardless, especially with Mars (Ares), the handsome, virile god of war.  While Vulcan is not cruel and capricious like some of the other gods, he knows how to put those who have wronged him in their place–literally.  He once subjected his mother, Juno to a spell of being tied to her throne with invisible chains.  (The scene of her release on the gem created for Prince Poniatowski by the carver who signed himself "Dioskourides" can be seen in the Beazley Archive.)  Taking the idea further, he wrought a whole net of invisible chains in which to trap his unfaithful spouse lying in bed with Mars.  He then called in all the other Olympians to ridicule the lovers caught in flagrante, forgetting how this might also backfire on himself as the cuckold.

There is the most astonishing, elaborate and unique cameo of this subject in the British Museum.  Carved in the early 1800s by Domenico Calabresi in multi-layered agate, the scene takes a circular form with the naked couple in the middle bound at their heads and feet by a mesh of chains while Vulcan points angrily at them from the side.  Around the circumference are the heads of the other Olympian gods and goddesses who watch in amusement.  We have yet to see this subject carved in shell. 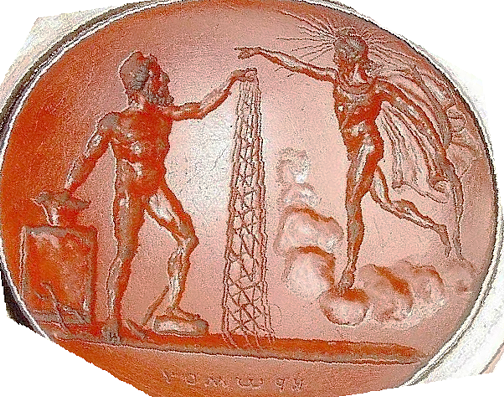 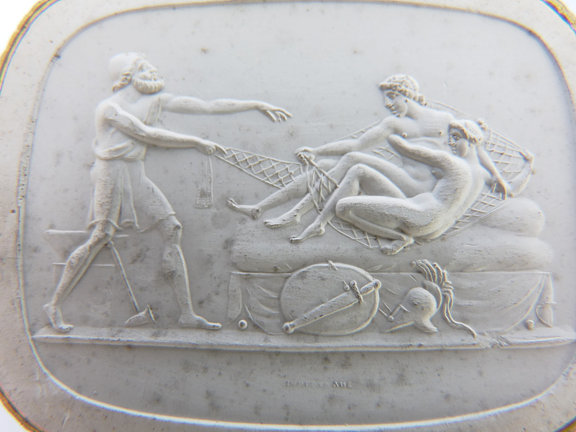 Vulcan found out about the affair through Apollo, to whom he is showing his ingenious net in this cornelian Poniatowski gem signed by "Kromos". The intaglio found its way onto eBay a few years ago.  Casts of the sequel, as imagined by "Dioskourides", also turn up from time to time. 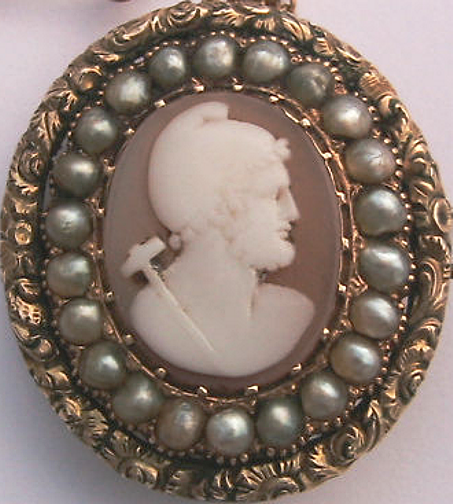 Not the most charismatic of gods, Vulcan is a rare subject in cameos and is generally portrayed as a mature, bearded man, dressed simply in a short chiton with one shoulder bared.  His upper body may look quite muscular.  In some literature he is described as ‘ugly’ but this is not apparent in the majority of cameos.  He almost always wears a cap that is either plain, slightly pointed or with the top curling over in the Phrygian style.  His posture may be slightly hunched (especially if he is working) and he is typically shown with the tools of his trade, above all a hammer, and sometimes an anvil and tongs. 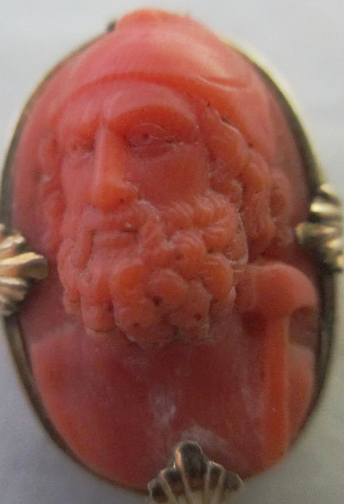 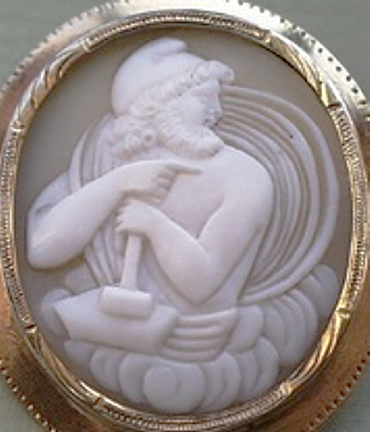 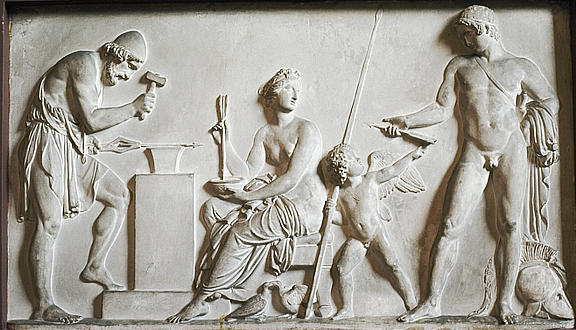 The most commonly seen cameo depiction of Vulcan shows him hard at work in his forge in the scene from Bertel Thorvaldsen’s bas relief.  This makes for quite a complex composition: with doves fluttering at her feet, Venus is seated in front of Vulcan, tempering the tips, while he hammers away at his anvil, forging arrows for her son, Cupid (Eros), alongside.  (The parentage of Cupid is uncertain; that Vulcan is his father is a minority position.)  Vulcan seems unaware that she has turned round to look at Mars, who is standing behind them, playfully swapping weapons with Cupid.  In most cameo presentations of the Vulcan’s Forge scene Mars is wearing a crested helmet, whereas in the actual bas-relief he is bare-headed apart from a fillet, with his helmet on the ground at his feet. 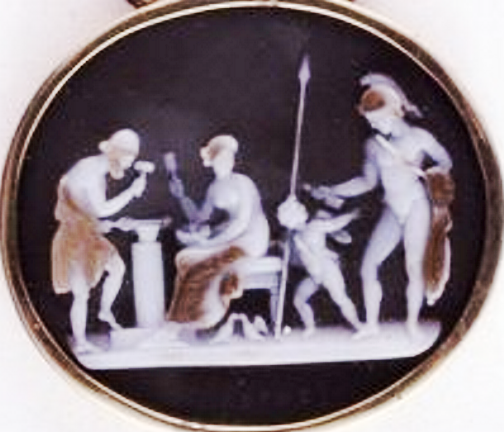 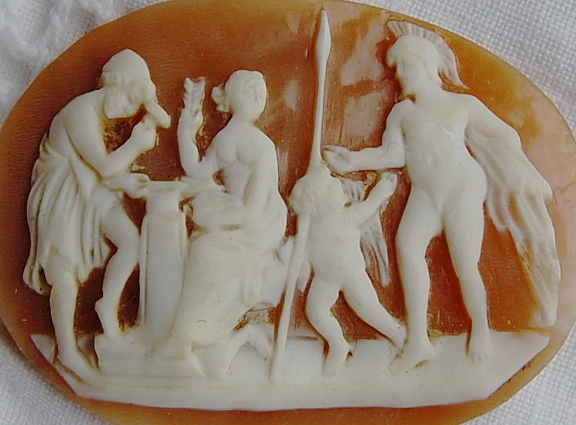 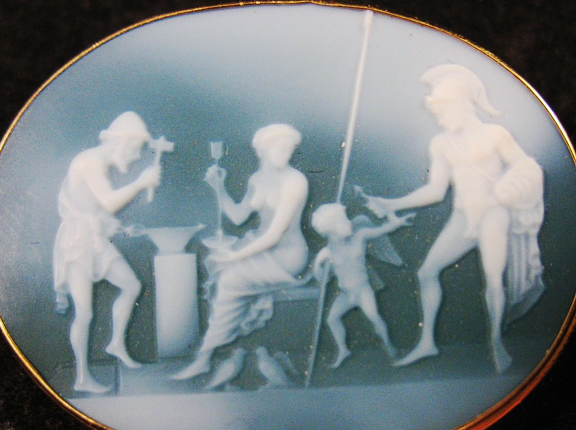 Another cameo scene that crops up occasionally shows a half-draped Venus ushering Cupid into the forge, presumably to procure some arrows.  Vulcan sits in front of them, hammer at his side.  We do not currently have an image of this but it is the central cameo in the necklace illustrated in Plate 30 of Nineteenth Century Cameos by Michele Rowan (2004).

It is ironic, but almost to be expected given Vulcan’s self-effacing nature, that we are far more likely to see the fruits of his labour in cameos than the god himself.  Besides the bows and arrows of Cupid and Diana (Artemis), he also crafted the magical armour of Minerva (Athena) - her shield, spear and aegis – as well as the golden chariot that carried Apollo across the sky, the sickle of Ceres (Demeter), the sceptre of Jupiter and various objects of allure such as Venus’s jewellery and the famous girdle that rendered her even more irresistible than she already was. 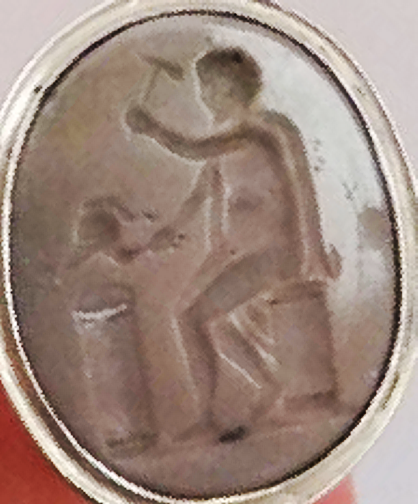 Another motif occasionally seen in older gems is that of Vulcan presenting Thetis, one of the Nereids who rescued him as an infant and the mother of the hero Achilles, with the weapons and armour he has forged for her son. Where he is shown alone forging a shield or helmet, it could be destined for Achilles but it could also be for Mars or Aeneas, Venus’s son by another of her lovers, the Trojan prince, Anchises. She certainly knew how to get round her husband.