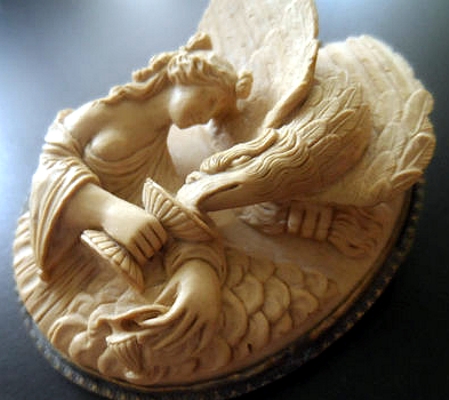 Certain subjects appear on cameos with much greater frequency than others; it is reasonable to conclude that these subjects had special appeal for women of the time,  What many of these subjects have in common is that they represent valued feminine qualities.  There is Ceres/Demeter, the dedicated mother; Psyche, the devoted lover; the Three Graces, embodying beauty, good cheer and generous hospitality.  And there is Hebe, the dutiful daughter.

A child of the marriage of Zeus/Jupiter and Hera/Juno, Hebe’s role on Olympus, until she is supplanted by the beautiful youth Ganymede, is Cupbearer to the Gods.  She also represents youth, as her Roman name, Juventas, suggests, but on cameos she is seen primarily waiting on an eagle, which is usually seen as her father in that guise, although it could be the eagle who serves the great god and carries his thunderbolts.

More often than not, the eagle is shown as feeding on the wing.  The spatial constraints of the average oval cameo lead to the bird’s having to contort its neck around in such a way that it is sometimes mistakenly seen as a longer necked bird, such as a swan, and thence to a misidentification of Leda.  Hebe herself may stand, sit or, most frequently, kneel. Sometimes she caresses the bird with one hand while holding out a bowl (patera) of nectar in the other. Sometimes she appears to be walking away, leaving the eagle to feed on its own. 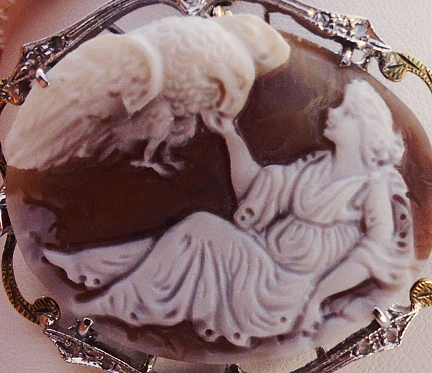 A contemporary take on Hebe shows her reclining at ease, a not particularly subservient pose, and feeding the eagle directly out of her hand. 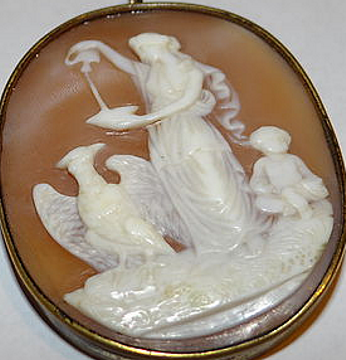 Another presentation of this subject has the eagle standing on the ground rather than twisting round in the air.  The eagle in this cameo is clearly a European eagle.  The tuft of feathers on its head sometimes causes these birds to be mistaken for the phoenix.  The carver may have added the seated putto simply to balance the composition, or to be a reminder of Hebe’s other role as the representative of youth.

Note: Hebe with the eagle standing next to her is one of the scenes Wedgwood uses on its Jasper Ware. Based on some descriptions of such pieces being offered for sale on line, there is evidently a Wedgwood reference source that incorrectly identifies the lady as Diana.

The two cameos below are virtually the same composition.  On the left, Hebe pours nectar into a patera held out by the enthroned Zeus, his eagle by his side.  On the right she does the same for the more humbly seated Hercules; the presence of Eros/Cupid with his torch reminds us that Hebe is now the hero's wife. 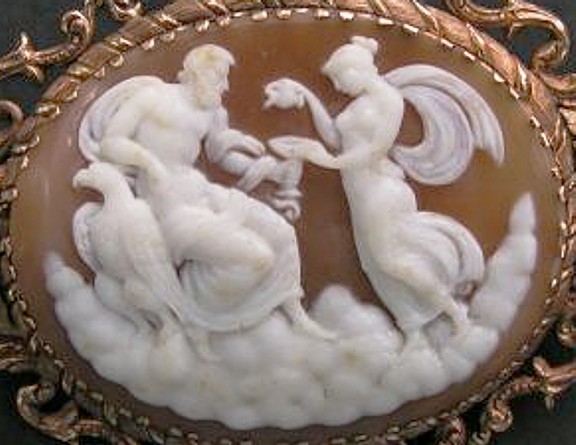 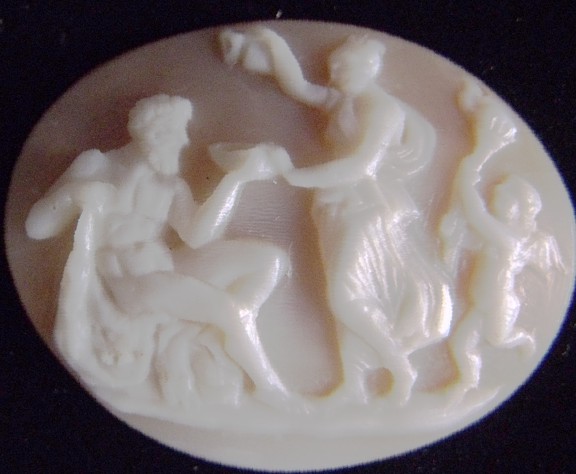 It is easier to recognize Hebe when the eagle is with her, but she does also appear alone. The attributes of the cupbearer are a wine jug and a kylix (a stemmed drinking vessel) or a patera.  Ganymede, who succeeds Hebe as cupbearer, is also depicted holding these items.  Hebe’s youth is indicated by her bare, immature breasts.  A sculpture by Antonio Canova captures all three attributes. 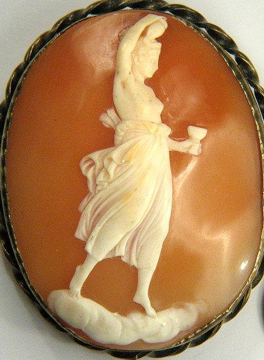 Bertel Thorvaldsen’s Hebe may have been the inspiration for this one in lava. 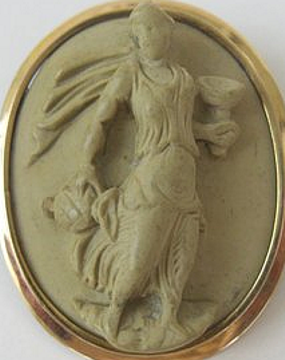 Depictions of Hebe and the Eagle are sometimes mistaken for scenes of Leda and the Swan, Jove in another avian form.  This subject will be taken up among the Profiles in the Subscription Edition.