Days of the Week

No matter how crude, if you see a bracelet with seven panels and there are chariots everywhere, you are looking at the lineup of the gods and goddesses for whom the Romans named the days of the week, each drawn in a chariot by the creatures or beings associated with them.  Modern Italians still use names for the weekdays that echo the old beliefs, but with Christianity came a renaming of the days of the Sabbath and a demotion to lowercase for all, while English continues to honor those weekend gods.

In the order they usually appear when the bracelet is laid out flat, from left to right:

If the panels are out of order, or any are upside down, there is a strong presumption that the bracelet has been broken and repaired.  If one is missing it has probably been shortened.

Depicting the gods and allegorical figures in chariots became popular during the Renaissance, with studio artists expanding on imagery in Petrarch’s poem Triumphs.  The originals the cameos are based on were by Raffaello Sanzio (Raphael).  The frescoes are lost; fortunately engravers made copies, as shown below.  Occasionally the gods in their chariots appear individually in venues other than bracelets.

Diana’s commanding, imperious stance and gesture suggest the moon’s power to control the tides and its influence over women.  The female draft figures are usually described as being two of her attendant nymphs.  However, Virgil mentions "Night [Luna] driven of the Hours as she traverses the arch of the sky".  Her chariot is ornamented with circling putti, echoing the Hours on the chariot of her brother, Phoebus Apollo.  Could these be Arktos, the Hour of Last Light, looking behind to the day just ended, and Auge, Hour of First Light, looking ahead to the day to come? 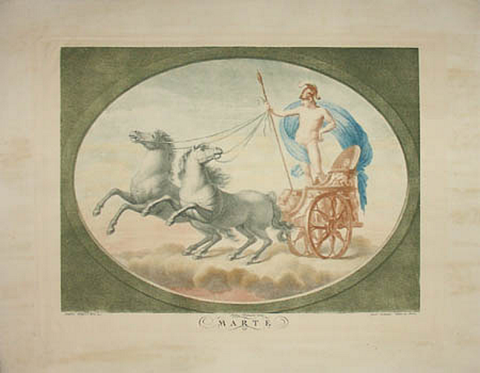 Mars, a young man of action, rides standing up with casual ease, despite his headstrong horses. 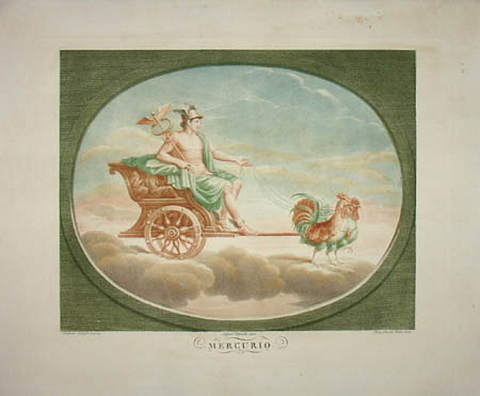 Although the assignment of the cock, or cockerel, as the creature proper to Mercury is ancient and consistent across time, the reason for the pairing is not clear.  The rosy fingered look of the sky Raphael placed behind this god may be an allusion to the story of how Mercury was born at dawn, even though only conceived the preceding night.  As the harbingers of daybreak, the cocks would be another reminder of this piece of biography, as well as of Mercury’s role as a herald.  They are even dressed like their messenger master.  As the original of this plate was probably an etching, it may have been the printer, when adding color, who gave them their livery, not a feature of the original fresco. 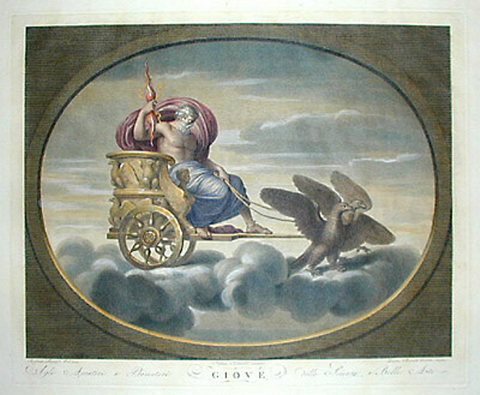 Jove rides stormy skies, lightning bolt in hand. Eagles have been associated with power and majesty back to antiquity. When laws of falconry were observed, only an emperor was supposed to fly an eagle. 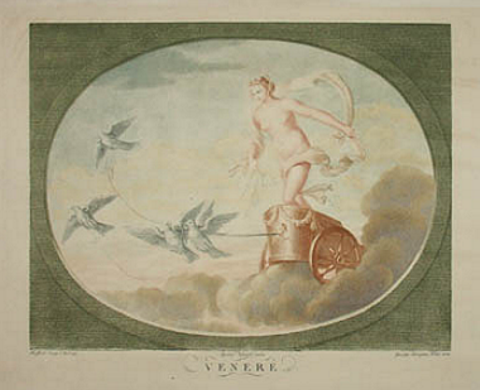 Venus’s primary attribute is her nudity.  This can pose a problem when it comes to rendering her as a bust only.  She is typically given a diadem to indicate her status as a goddess, although as an alternative, may have her hair arranged in what is sometimes called a "Venus knot".  The head may be demurely lowered.  No hint of drapery will show about her shoulders and breast, or it will be disposed in such a way as to reveal, or suggest, an unclothed bosom.  The doves embody some of her other attributes: grace, gentleness, softness, whiteness. 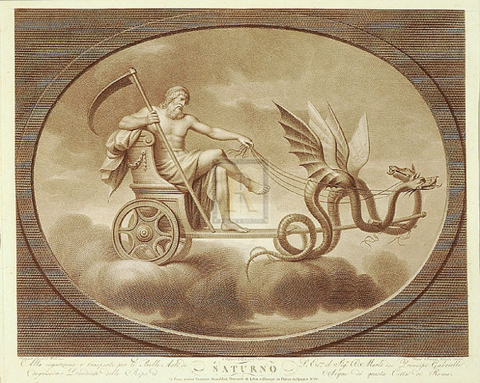 Saturn carries a scythe.  The Romans got the Greek name for this god, Cronus, confused with the Greek word for time, chronos, which mows down all things.  Winged serpents occur in the tales of many cultures and seem often, despite the wings, to be associated with subterranean water courses and are of course fearsome, like death itself. 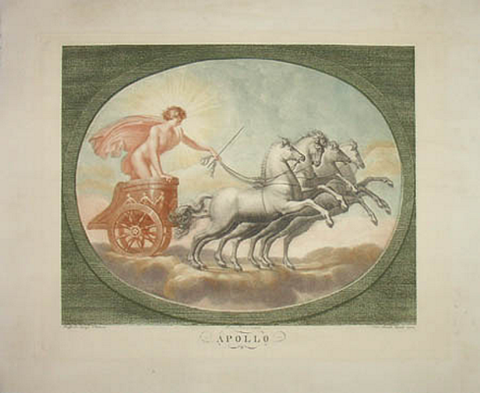 Raphael gave his Apollo such prominent pectoral muscles that on some cameos he is easily seen as a person with breasts, and so misidentified as Nike, Aurora or Venus.  But only Apollo routinely drives a quadriga. (All those legs are a challenge to get onto a bracelet panel; how well this is done is something to look for in assessing the quality of a piece.  Raphael knew better than to try; eight hind legs are visible in his composition, but only seven forelimbs can be counted.)  The radiance around him is also his exclusively among the classical figures.  Some of the Hours can be seen decorating his chariot in their endless dancing round.

Executing so much detail on a bracelet panel that is typically no more than one inch wide is rarely done well.  Some are done with almost no curved lines at all and can have a Mesoamerican look to them.  While far short of “museum quality,” this carver accomplished the task fairly well, although close comparison will show some departures from Raphael.

Mother of pearl is another popular material for use in these bracelets. The Days of the Week are perhaps the most common subject rendered in this medium.

Although we have lost some of this information in the present day, it would have been known to the original purchasers of these bracelets through the labeling provided with them.

There are also Days of the Week bracelets with each deity represented as a bust only.  Without the telltale chariots and draft animals, it can be easy to see a random collection of classical figures. A bracelet with seven panels, unless it is one on which every panel is clearly the same, often turns out to be the Days. Bust versions do not seem to be based so clearly on a single original source. 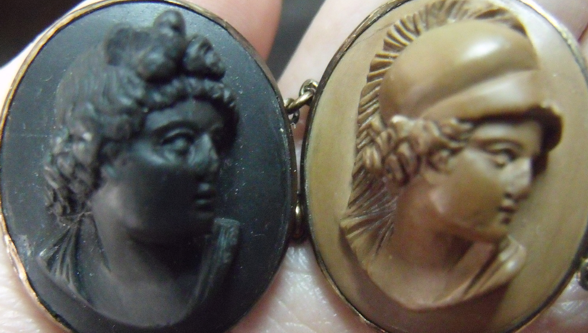 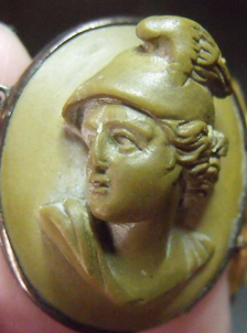 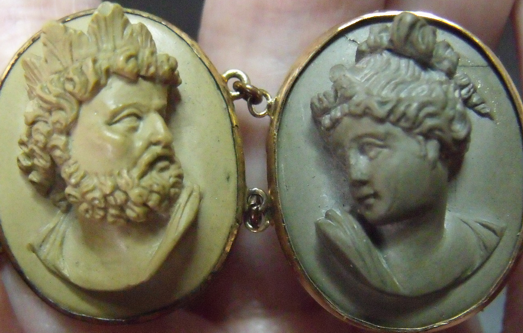 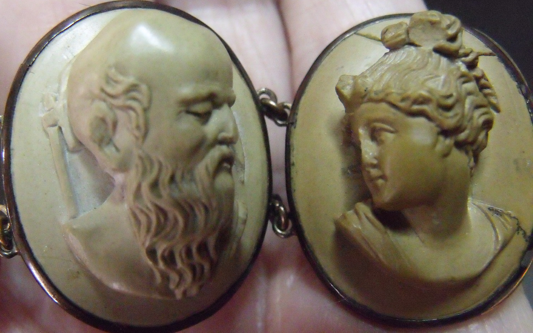 The cameos in this lava bracelet do appear to have all been carved by the same hand, so that Saturn looks as benign as Venus. 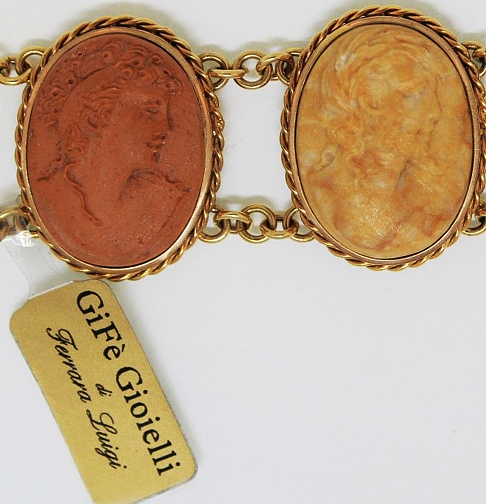 Addendum: A lava Days of the Week bracelet nearly identical in overall appearance to the one shown above, including the iconoclastic choice of using black for Apollo/Sol, has recently appeared on eBay.  The tag, for GiFè Gioielli, clearly identifies these softer, gentler depictions of the Olympians as contemporary work.

The Days of the Week are seen most commonly in bracelet form but do make some other appearances, which can be seen by clicking here.