Doves appear on cameos in several significant roles. As symbols of gentleness and beauty, they are the proper animal of Venus (Aphrodite), the goddess of love. Her son Cupid (Eros) has the wings of a dove. (See also: Venus; Cupid; Days of the Week.) Doves are also, along with the butterfly, ancient symbols of the soul, spirit, or human life force, and represent this in some allegorical and mourning compositions. The Holy Ghost, or Holy Spirit, is represented as a radiant dove in religious compositions.

One cameo subject that turns up regularly is known as Pliny’s Doves, because the lost original on which subsequent copies or recreations were based was described by the historian and polymath Pliny the Elder in his great work Natural History, under the section concerning pavements:

Pavements are an invention of the Greeks, who also practiced the art of painting them, till they were superseded by mosaics. In this last branch of art the highest excellence has been attained by Sosus who laid at Pergamus the pavement known as the “Asarotos œcos”; from the fact that he there represented in small squares of different colors the remnants of a banquet lying upon the pavement and other things which are usually swept away with the broom, they having all the appearance of being left there by accident. There is a dove also, greatly admired, in the act of drinking and throwing the shadow of its head upon the water; while other birds are to be seen sunning and pluming themselves on the margin of a drinking bowl. (Loyd Haberly, trans.) 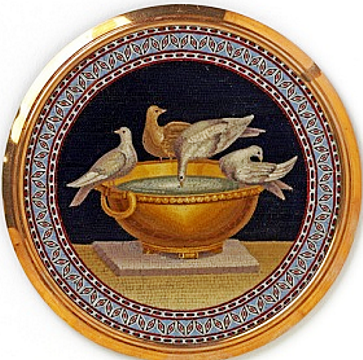 The Victoria and Albert Museum owns this mosaic.  About it the V&A says: These doves, known as the Capitoline Doves or Doves of Pliny, appear frequently as the subject of micromosaics. The image comes from a Roman floor mosaic discovered in 1737 at Hadrian's Villa in Tivoli, which in turn is believed to be a copy of a lost ancient Greek mosaic at Pergamon. The original is described by Pliny the Elder in his Natural History, completed in 77AD.

Pliny, who was also something like a news reporter for his time, lost his life when he went to witness the eruption of Mt. Vesuvius that buried Pompeii, probably overcome by the poisonous gasses being released.

Cameo renderings of the subject stay fairly true to the Capitoline version. A refinement to look for is whether or not the carver has captured the drinking dove’s reflection in the water. 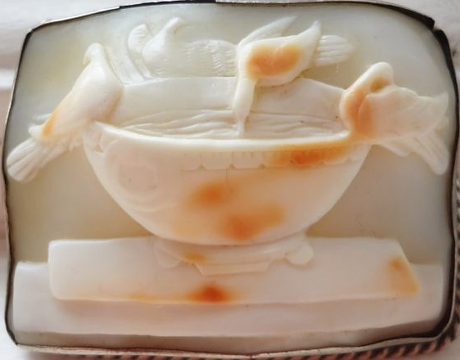 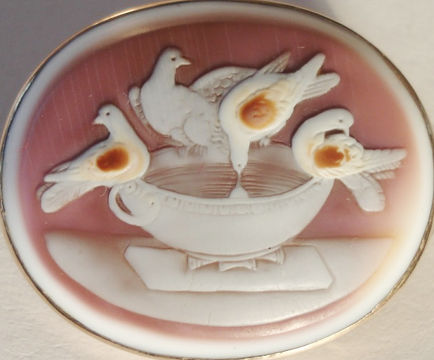 The Italian town of Ravenna is renowned for its mosaics. A well known one is in the Mausoleum of Galla Placidia and is very similar to the one Pliny admired at Pergamon. 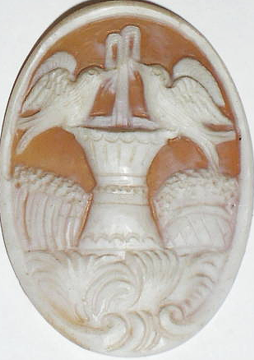 In a Christian context, the doves and water become allegorical. In his exchange with the Samaritan woman at Jacob’s well, Jesus tells the woman that those who drink the water of the well will thirst again, while the water he can give her to drink will be a well of water springing up into everlasting life. (John 4:14)

In Psalms (42:1-2) we have:   As the hart panteth after the water brooks, so panteth my soul after thee, O God; My soul thirsteth for God, for the living God.

The refreshment of the spirit at the wellspring of faith is reflected in pieces such as this one.

In contrast to the joyousness of the drinking doves is the sorrow conveyed by the limp form of a lifeless dove held to the breast of a young child or a fair young woman, a recurrent motif of mourning pieces. There is a particular connection between the image of the dove as a departing soul and the loss of a child. Research for this section turned up a Flickr page devoted exclusively to photos of gravestones and monuments for children featuring doves.   This did not originate with the Victorians, even though Queen Victoria’s mourning for her beloved Prince Albert, which her widow’s weeds betokened to the end of her long life, made mourning and mourning jewelry fashionable.


While the colors would suggest that, of the two cameos with a woman, one is helmet shell, one black onyx hardstone, their being an exact match for each other down to the smallest folds of drapery gives them away as molded resin, rather than hand carved natural material.  However, the image is so appealing, such pieces have done very well in on line auctions.  The third cameo of a child holding a dove is also resin.

This marble stele from the tomb of a little girl (collections of the Metropolitan Museum of Art; Greek, possibly Island of Paros; 450 – 440 BCE) conveys bereavement, almost beyond consolation.  While here it is she who is saying farewell to her pets, the basic imagery lends itself well to expressing the special bereavement of losing a child. The ancient Greeks had a literally dim view of such afterlife as there was as being interminable existence as a shade in a gloomy place that was neither heaven nor hell.

The hope that is the central message of Christianity is expressed in compositions such as these. 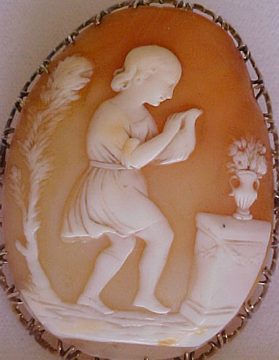 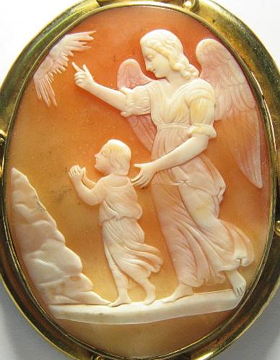