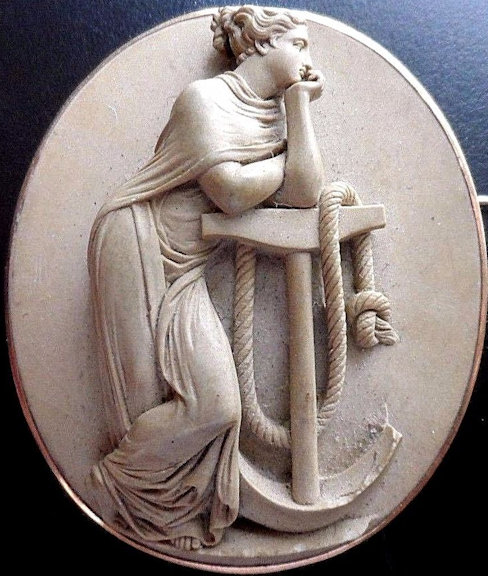 The anchor is the traditional Christian symbol of hope.  There are several different fairly common cameo compositions featuring an anchor and presumably worn as an expression of hope, whether a general faith that all will be well through divine will, or a more specific wish for the welfare of someone away at sea.

Below are (l. – r.) a Wedgwood trial medallion from 1770, a sulphur impression of an “unpublished” Tassie gem from Oxford University’s Beazley Archive and a more modern Wedgwood version of the same subject.  The Wedgwood Museum titles the medallion “Hope & Anchor”; the Archive identifies the Tassie as Tyche, goddess of luck/fortune.  However, the Archive’s “unpublished” items seem not to have yet received serious scholarly attention and many are clearly mislabeled.  The one attribute specific to Tyche is her crenellated "mural' crown.  It is difficult to be certain, but the Tassie figure does not appear to wear such a headdress.  While there is evidently confusion about this in the numismatic world as well, Tyche, who steers us this way and that, is indicated by a rudder, which on some ancient coins bears a resemblance to an anchor.

A more ethereal image has an angel instead of a mortal woman, hand(s) over the heart.  She too is Hope, perhaps praying for someone whose soul is already departed.  The anchor is no longer upright, it has fallen; the hope is for things in the world to come, not this earthly one.  John Gibson designed the figure on the right as a monument to Edward and Margaret Roscoe. 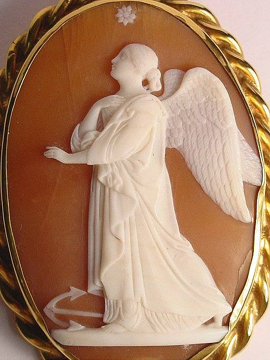 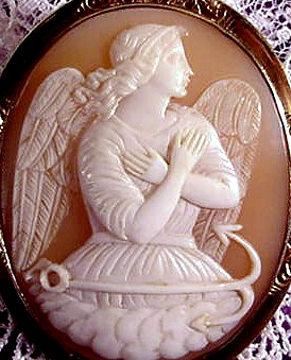 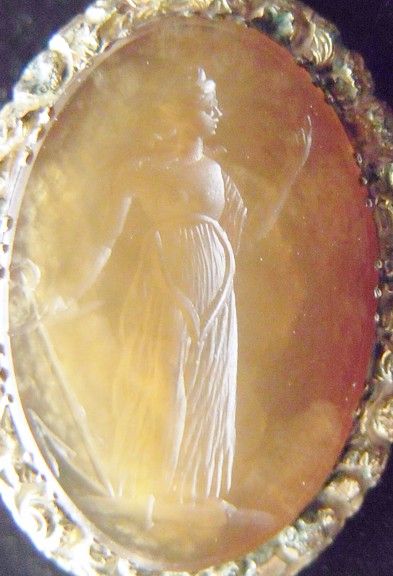 The figure in the intaglio to the right, holding an anchor upright with her right hand, embodies not only Hope, but also Consolation to the bereaved, reminding them, with her upraised finger, that the departed is now in a better state.  A similar figure can be seen in a larger scene by the English gem engraver William Brown, as impression 8065 in the James Tassie collection of the Beazley Archive at Oxford University.  (See also impressions 8097-8099.)

The most common hope cameos feature a pretty woman, classically styled, with an anchor in front of or behind her, or hooked over her shoulder, where it can be difficult to recognize.

The first cameo is unusual in having an anchor as the sole symbolic element.  The others are typical presentations of this subject.  On her brow is what may easily be mistaken for a flower or a starfish, but is actually a star.  This is Polaris, the North Star, the star sailors navigate by.  The image expresses hope for the safe return of someone at sea.

It can be imagined that these cameos were given as sweetheart gifts, as this anchor pin, with hearts as the flukes at the ends of the arms, surely was.  Such a cameo would have signaled that the woman wearing it was doing what was expected of her by keeping her man in her thoughts, remaining loyal and, presumably, faithful.  Perhaps it also served to send the message that although the woman was unescorted, in public places or at social events, she did have a man in her life, so should not be an object of pity, nor the target of amorous advances. 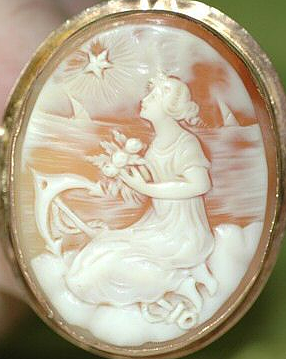 The meaning of these cameos is fully laid out in this very unusual piece, which may have drawn inspiration from another of the Beazley Archive's unpublished Tassie gems, again identified as Tyche.  Unfortunately the quality of the photograph is not high enough to know with certainty whether this lady wears the mural crown or this is merely a lighting effect. 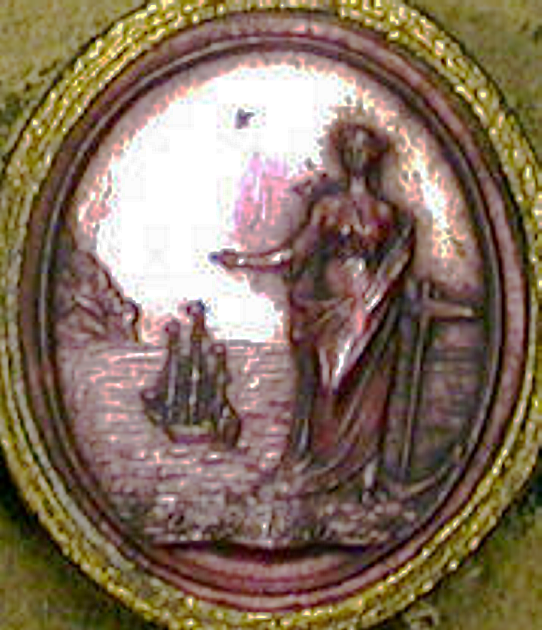 There are also cameos that have no anchor, but with a lady who wears a star on her brow.  These would be difficult to interpret if not for the many that do include an anchor.  It is possible the figure with clouds below her was meant to be Aurora/Eos, the Dawn, with the morning star on her brow. 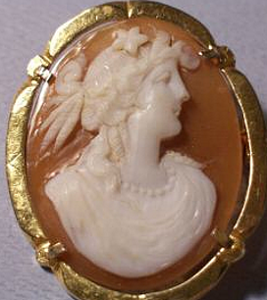 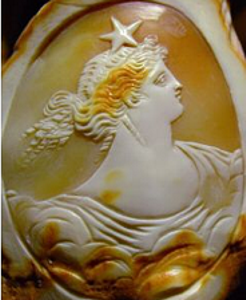 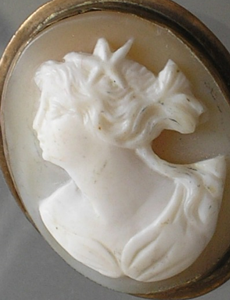 Variants do turn up, with equally clear meaning.  Understandably, the figure steadying an anchor with her two hands is sometimes identified as Britannia.  However, despite Britain's naval supremacy, Britannia is conventionally shown with the attributes of a warrior.  She is also sometimes accompanied by a lion.

The red sulphur Tassie impression from the Beazley Archive is again identified as Tyche.  In this case there is the suggestion of a mural crown, although the posture of the figure seems more that of someone contemplating fortune rather than controlling it.  Perhaps the meaning is that the sea is an even more powerful actor in the fate of men than Fortune is. 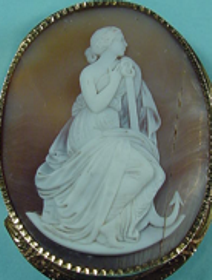 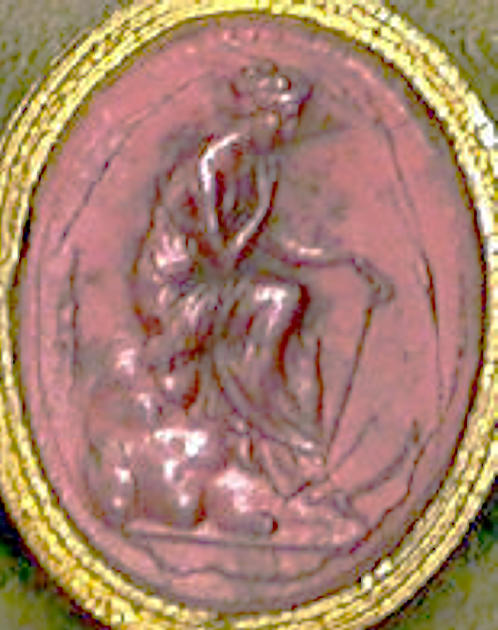 A less common presentation of the subject, combines conventional elements in a somewhat unconventional way: she hoists her anchor with one hand, resting the shank on her shoulder rather than hooking it over.

This woman wearing a turban is garbed as a sibyl, but Tassie impressions (8091-8093) of this same figure are identified in the Index as Hope, without an attribution to the original author. The prestigious Accademia di San Luca, in Rome, requires all members to provide a portrait for their collection.  The extraordinary Swiss-born 18th century painter (Maria Anna) Angelika, or Angelica, Kauffmann submitted a portrait of herself as Speranza, Hope.  Cameists would have known the painting from engravings; this one is quite faithful to the painting; others make her look either more melancholy or more cheerful.  However, apart from the expressions, the two cameos are more like each other than like the engraving.  At some time a cutter decided to give his Hope, perhaps unaware of her true identity, richer robes, more in keeping with other sibyls, and the alteration was replicated; the cameo on the right is much more modern than the one on the left. 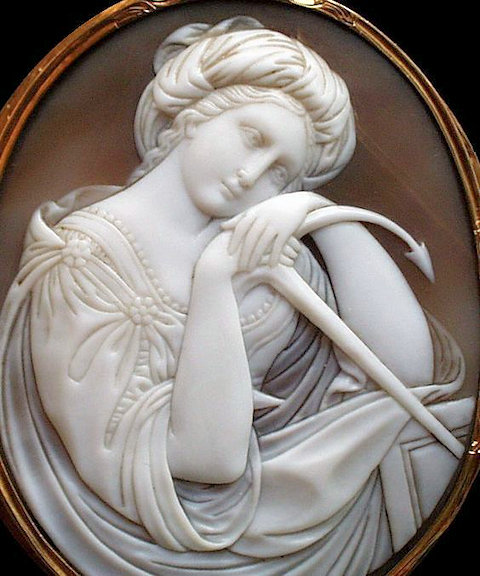 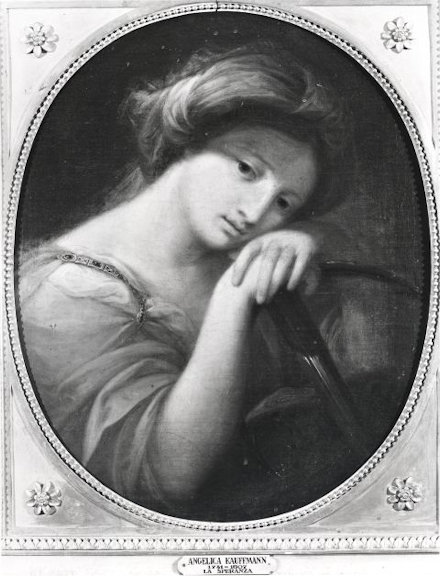 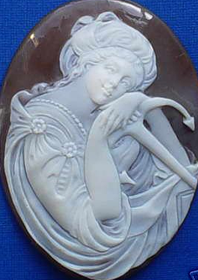 The cameo figure below was identified by the seller as St. Philomena.  An anchor, which was engraved on her tomb, is indeed one of this obscure saint's symbols.  Strongly arguing against this interpretation is the lack of  a halo.  Clearly modeled on the 19th century painting shown next to her, a creative appropriation of a famous image, Raphael's Triumph of Galatea, it seems more likely this is again an expression of hope, in this case perhaps for the survival of the shipwrecked.  The carver has placed her on what appear to be broken planks rather than on the rocks of the painting.. 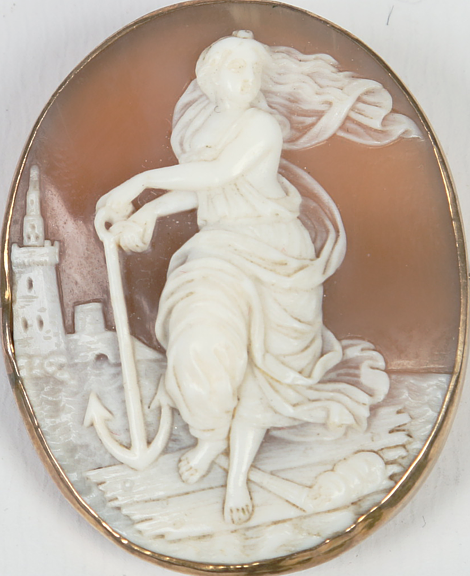 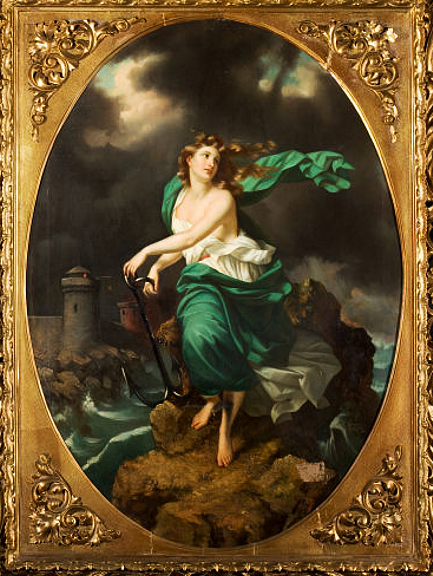 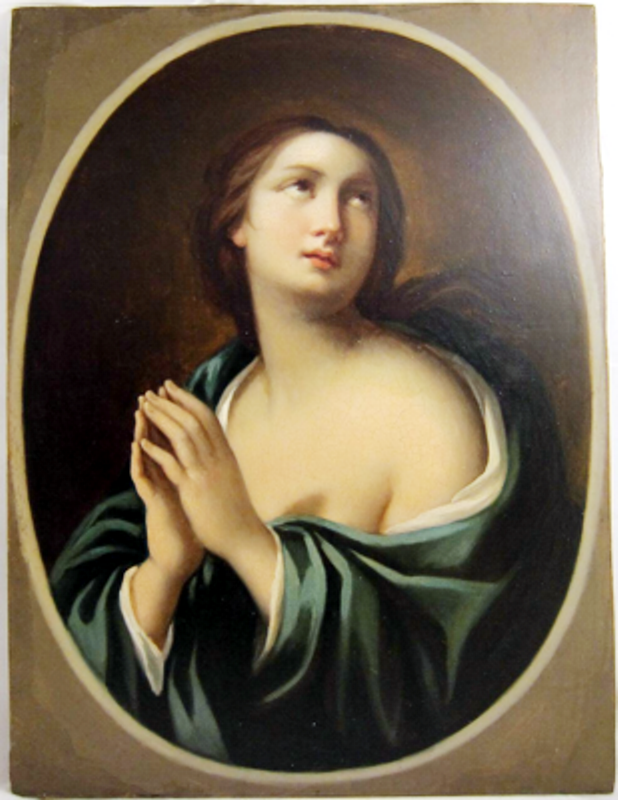 The painting to the right, and the cameos so clearly inspired by it, are routinely and quite reasonably identified as Mary Magdalen.  The painting, and others like it (there are at least five still extant), are always described as being nineteenth century copies of an unspecified work in the baroque style of Guido Reni, and usually ascribed to a follower rather than to the master himself.  Until renewed efforts to solve the mystery of this lady's origins at last found an answer, Cameo Times had also seen her in this light. 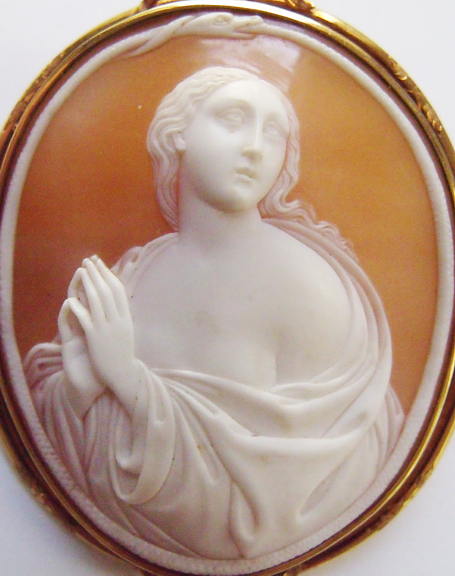 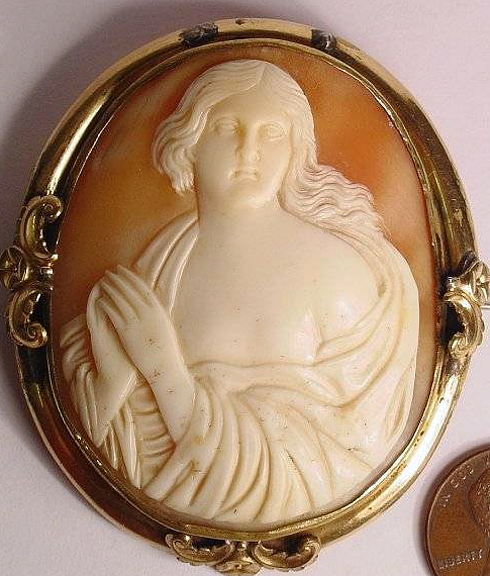 She would have stayed among the other Magdalens had not the discrepancies continued to nag at us, not to mention the seemingly arbitrary insertion of an anchor behind the figure by some cameo cutters, despite its absence from any of the paintings.

The first clue came when another of the paintings was located in a museum in Bucharest devoted to the painter Georghe Tattarescu and his work.  Although the notes on the painting say it is a copy of a Guido Reni Madonna, the title is Hope.  This offered the beginning of an explanation for the anchors: were some artisans working from a print of the Tattarescu work with this title on it? 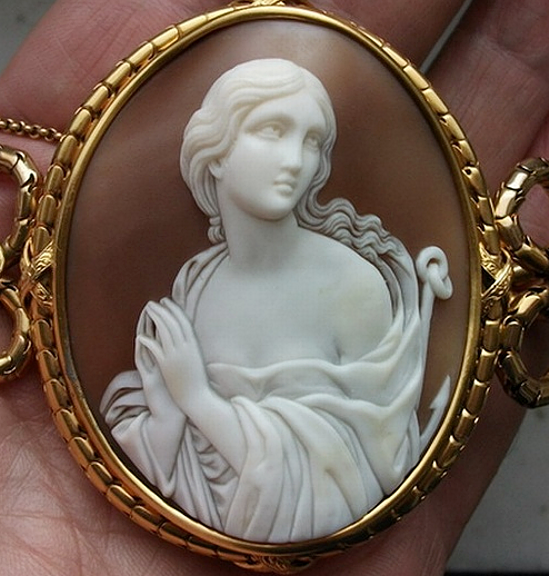 The matter stalled there for a time, but persistence did finally pay off when several engravings in the collection of the Metropolitan Musem of Art presented themselves, all described/titled as Female Personification of Hope. 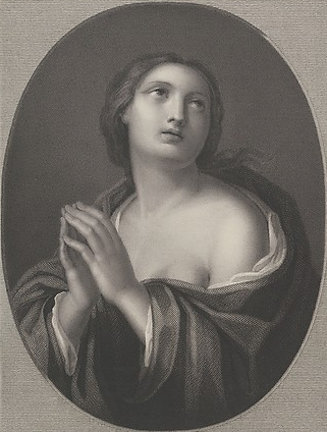 One of the two engraved by Giovanni Buonafede has, in addition to the title, La Speranza, the information that the original painting by Guido Reni is in Rome, in the church of St. Peter in Chains (Chiesa di S. Pietro in Vincoli).

As of this writing, we have seen this subject executed in hardstone only once. 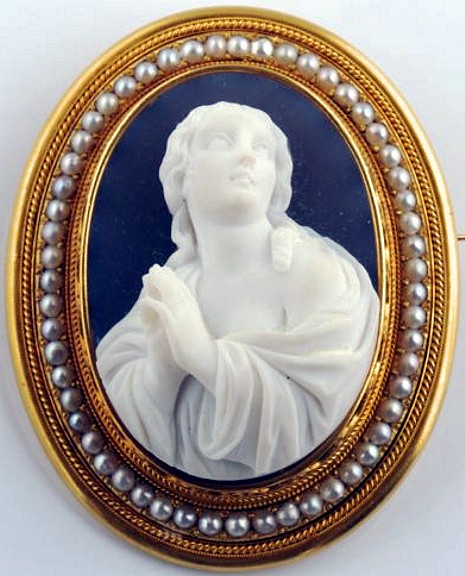